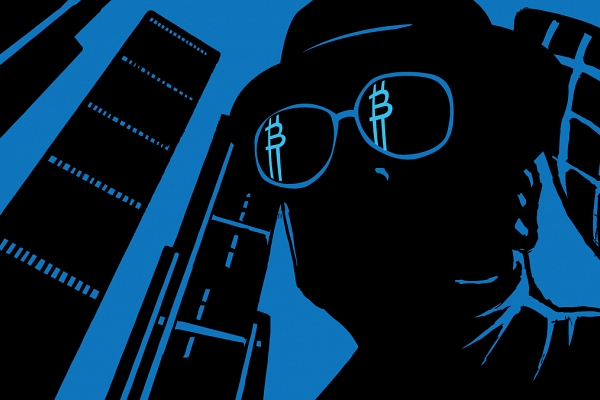 At a meeting of the Bitcoin and Blockchain Leadership Forum (BBLF) on January 28th at Rise London, I met the inventor of bitcoin.  I’m serious.  Not this one. Nor the Australian Genius. Nor one of the ten people who have been proposed as the founder of the now global cryptocurrency. And not one of those armed with sage advice on how to spot a Bitcoin inventor, as well as a love of creation myths, I suspended my disbelief. He looked the part. He might have been a whirling dervish or a bohemian guru. I am going to respect his privacy and not publish a photo of him (though I have a very blurred one (of course) of him sitting at the back of the well over a hundred people who packed a room meeting to consider the future of Bitcoin and even to vote on whether it has died).

He introduced himself as Satoshi Nakamoto and confirmed he was indeed the inventor of Bitcoin. He’d come to check us out and had decided to finally put his elusive crypto-head above the radar.

Listen. It might be him. When did you all become so cynical? Though some say it doesn’t matter, I was intrigued. He told me with a calm, knowing look,  that the ‘real Bitcoin agenda’ would ‘reveal itself by the end of the year’, that it would ‘involve the big banks’ and that… well that it was ‘all good’. That sounded like creator talk to me. And it seemed very appropriate to have at least one of the Bitcoin inventors at an event considering its future. He sat at the back, spoke once, where he announced his prophecy about the “revealing agenda” and then silently watched the events of the morning unfold.

The room was asked the rather twee question “Is Bitcoin dead?”, as developer Mike Hearn had recently proclaimed. We voted in the room – simple hands up. Over 95% of the 100 people in the room said a resounding “No.” Perhaps not surprising as a lot of Bitcoin start ups as well as larger corporations (including banks) who had some kind of commitment to, or interest in it, made up the room’s audience.

But also, judging by the regular and genuine stories shared at the BBLF sessions, Bitcoin, and its underpinning technology, often phrased as THE Blockchain, are far from the graveyard of failed innovation. At this session we heard from Hugh Halford-Thompson from BTL Group who demo’d just how easy bitcoin payments can be. Traditional banks and institutions are still set in their ways and innovators like Hugh are looking at ways to harness the potential of Bitcoin to make remittance easier and cheaper, benefiting those without easy access to traditional banking. As services such as this roll out, traditional money transfer is going to be turned on its head. So much for Bitcoin being a failed experiment.

If you are a Bitcoin purist, a hardcore ideological revolutionary, you may well pronounce the  “pure” form of the Bitcoin experiment as dead. Because Bitcoin is changing, and the Blockchain is unravelling way beyond cryptocurrency projects.

Some larger institutions are responding and even being proactive in terms of innovation and attempting to disrupt their own established ways of doing things. For example, Visa are actively seeking to incubate ideas in partnership with start-ups, including those in the Bitcoin space. We heard from Visa‘s  Innovation Partner, John Downing and Epiphyte’s Co-founder and CTO Or Barmatz,   who are working together as part of Visa’s Collab initative, on using Blockchain to improve global remittance. We got a first-hand look at a mobile app that can really ease remittance, via Bitcoin, interfacing with traditional banking systems but also able to flex into countries where people don’t have access to traditional banking. Taking these innovations through a proof of concept process  in a partnership between larger corporation and start-up may be sacrilege to some in the Blockchain community. To many in the room it seemed a way to positively disrupt and innovative both traditional banking and to enable creative start-ups to ensure the Bitcoin experiment is very much alive and evolving.

Systems across the world differ in each country and any projects and start-ups have to be agile, able to adapt to different rules, governance and network infrastructure. Some countries are currently next to inaccessible and a close eye is being kept on how regulation may roll out as the clearly-not-dead Bitcoin experiments begins to go mainstream. Remittance has to be flexible, country-specific and able to work with infrastructure limitations and gadget access and diversity. The benefits? Wider, cheaper and much faster access to remittance.

There was a buzz at this BBLF gathering in London. Most people had no idea there was a possible Satoshi Nakamoto was in their midst. At the end of the session he approached me, thanked me for a very good meeting and said we’d be hearing from from him. In his view, the next deployment of Bitcoin is going to come from the big banks. You heard it here first. He disappeared, dressed in swish and bohemian black,  into a murky, wet-winter London, the skyscrapers of the City,  like tall guards, on the near horizon.

Was it him? I’ll keep you posted.

Paul Levy is author of the book, Digital Inferno, a senior researcher at CENTRIM (The Centre for Research in Innovation Management) at The University of Brighton, UK, and facilitator for BBLF.